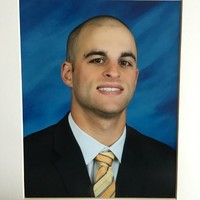 Eric Scamardella is originally from New Jersey. Following high school, he played 4 years of varsity baseball at Catholic University where he was a left handed 1st baseman and outfielder. At Catholic, he was a member of the 2015 Conference championship team, going on to play in the NCAA Regionals. He was team captain both his Junior and Senior years, has recently obtained a Masters degree and now works in public accounting in Tyson’s, VA. This will be his 8th season with BBA since joining back in 2016.