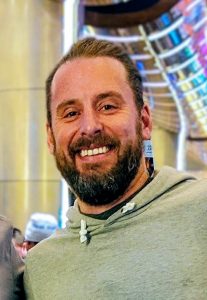 George Merrell is a native of Lakeland, FL where he planted his baseball roots playing Little League in a competitive community environment. Upon moving to central Pennsylvania as a teenager, Coach Merrell graduated from Central Columbia High School, where he pitched and played third base as a four-year starter.  In addition, he quarterbacked the football team and was a power forward on the basketball squad.

Following high school, Coach Merrell attended Johns Hopkins University as a multi-sport athlete, playing both baseball and football.  He was able to hone his skills serving in the starting pitching rotation for Blue Jay baseball and leading the football team at quarterback.  Coach Merrell graduated in 2004 with a Bachelors of Arts in Economics.

After spending many years in the business world, Coach Merrell decided to pursue his passion to teach and coach young athletes. In 2019, he assisted the Reston Warriors Baseball 10U Black team as an assistant coach, focusing primarily on pitching development.  Coach Merrell is extremely excited about the opportunity to work with Bradley Baseball, supporting student athletes both on and off the field.