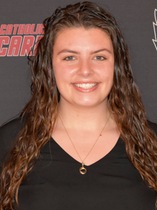 Sabrina Scott begins her first year as a graduate assistant at her alma mater. Scott will earn her Master of Science in Biomedical Engineering in May 2021 and is also pursuing a Master of Science in Business.
As a Cardinal, Sabrina had a successful softball career as a pitcher, hitter, and fielder, helping the team reach the Conference tournament each season. She earned various honors, including First Team All- Conference, 2nd Team All-Conference, All Sportsmanship Team, Player of the Week, Pitcher of the Week, Outstanding Student-Athlete Award finalist and was named to the academic team each season.
Off the field, Scott was Co-President for 2 years and Vice President for 1 year of the Student-Athlete Advisory committee (SAAC).  During her time as an officer, the Cardinal community raised $88,480 in funds for Special Olympics during CUA’s annual Polar Bear Plunge.
Scott graduated Cum Laude with a Bachelors in Biomedical Engineering, minor in Neuroscience.  She was recognized as a finalist on University Research Day and also has a patent pending for her senior design project, post surgical pediatric cardiac monitor.
Scott attended Shawnee high school in Medford, NJ.  She received All-Olympic Conference honors in both softball and volleyball and was a Member of the National Honors Society.
Posted in: Uncategorized